How to Make Map Emoji Symbols?

Do you ever wonder how to type map or globe symbols in your documents? Unicode has map symbols as part of the emoji which you can insert on documents using different methods. This will be useful to type simple globe showing different continents quickly in your PowerPoint or Word documents like below.

Below is the list of alt code shortcuts for map emoji symbols in Windows computer. The Word shortcuts will work only in Microsoft Word documents in Windows.

There are multiple ways to insert these map emoji in Windows based computers.

On Mac, you have to use the emoji panel called Character Viewer app.

Below are the code examples for HTML and CSS to insert map emoji symbols.

Apple devices like iPhone, iPad and MacBook will display map emoji as solid symbols. This looks beautiful and you can easily insert the globe emoji symbols to explain the location of a country or continent.

However, the map symbols will show as a line diagram on Windows based document. Though it does not look real, you can still change the color, background and apply other text effects.

Note, the world map emoji symbol may look completely different in some applications and browser. You can copy paste the symbol to show it like a atlas like below. However, you will see the world map on a folded paper in most applications that may not be much useful.

Instead of using emoji, you can also download all map and traffic related symbols as images to use on your documents. 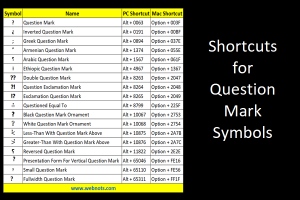 Shortcuts for Question Mark Symbols in Windows and Mac

You can type the question mark symbol ? by pressing[...] 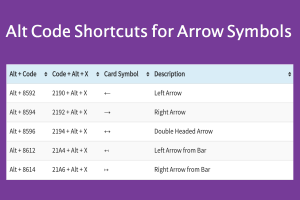 There are four arrow keys on a standard keyboard to[...] 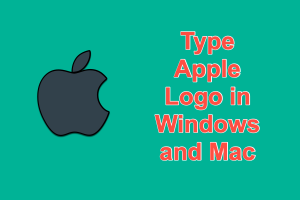 How to Insert Apple Logo Symbol in Windows and Mac?

Apple is one of the most valuable tech companies in[...]