How to Fix Frequent App Crashing Issues in Android 12?

Android is an exceptionally reliable operating system for mobile phones developed by Google and its allies. The core of the Android mobile operating system is a modified version of the Linux kernel, which is famous for its security, customization, and extensive community support. It is why Android has the award of being the most popular operating system around the globe. However, with any other operating system, some apps may crash continuously after installing it in Android phone. We present here some common troubleshooting tips to fix apps crashing issues in Android.

Google Play is the official app store for Android users. It has the largest number of apps next to Apple App store which is in second place. It means the Android users have wide variety of apps available and you can download most of them for free. Due to continuous update of the operating system, some apps may crash due to compatibility issues. Similarly, some other apps might work for some time but stop working with bugs and updates. Here are some of the simple solutions you can try to fix app crashing issue in Android.

If you have just installed an app and it crashes right after installing, restarting the phone might fix the problem.

Keeping the apps updated is a good habit because updates carry the latest features, bug fixes, and security updates. However, sometimes the latest updates can be buggy and is the most frequently occurring cause of a crashing app. The best advice is not to update a vital app immediately and wait for some time. Check feedback about the update, and go ahead if the feedback if positive otherwise refrain from updating the app.

If an app crashes recently after an update, that update is probably the culprit. For system apps, Android offers an option to revert back the update and reset the app to its initial state. Follow the below procedure to reset the updates for system apps like Chrome.

Note that resetting will not move the app back to its previous version, it will reinstall the app like when you purchased the phone. If you want to learn disabling automatic updates, then check our article on how to disable automatic updating of the apps on Android.

3. Compatibility Issue Between Android and App

Compatibility is another most common issue for an app to crash frequently in Android. It happens due to incompatibility between the Android operating system setup and the app code. Though you can reset system apps, it is not possible to uninstall the updates for third-party apps in Android. There could be two problems with app compatibility. One is the app was developed for latest Android OS, but your phone is running old Android OS. Second is you have installed an obsolete version of the app developed for old Android but installed it on the latest Android phone. Both issues will cause problems and there are possibilities that the app won’t run properly on your phone.

The following steps can help you fix this issue.

Remember, this feature may or may not work depending on your Android phone. Moreover, there is a risk of installing potentially dangerous apps on your phone with this installation method.

If the above tips are working, something might be wrong with the app or its modules. Sometime the app may get stuck and not respond when you tap. Here you can use force stop option to close and reopen the app.

Many social and documentation apps keep large amount of data in the cache. This helps to automatically login and quickly access previously accessed chats or documents. However, this can affect the performance of app and phone when the original app size is 50MB while the current cache/data is more than GB in size. The solution is to delete the app data and free up storage space which can help the app to run properly.

If clearing app data fixes the problem, it is a short-term solution because once cached data builds up again, you may start facing the same problem. For documentation and chat apps you can back up the content before clearing storage. However, for other cases, you may need to find alternative lightweight apps that do not occupy big storage space on your phone.

If the crashing app is not important for your daily use, then the solution is to simply delete and retry.

If none of the above steps work for your crashing app, you must contact the developer for assistance. Most Android apps will generate a crash report which you can share with the developer and get the fix for the issue. This works when you have a premium app with custom support. If you have problem with free apps, the only option is provide feedback in Google Play store app page and wait for the developer’s response.

Warning – Some actions like resetting, uninstalling, and clearing storage/cache will delete all data associated with that app. Once done, the app will work as if it has just been installed. You also need to set up everything again as you did for the first time. Therefore, make sure to take a backup of everything including the log-in information before doing these actions. 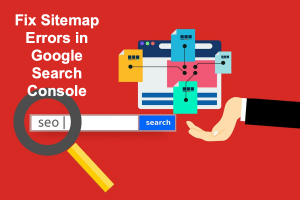 How to Fix WordPress Sitemap Errors in Google Search Console?

Google Search Console (GSC) is a free set of tools[...] 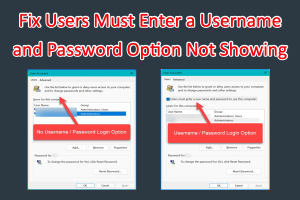 Fix Users Must Enter a Username and Password Option Not Showing

Fix Windows Not Showing Users Must Enter a Username and Password to Use This Computer?

Windows offers multiple ways to login to your computer using[...]

Five Quick Ad Facts First believe that ads in their[...]