Home » Tech Tips » Apps » How to Use Voice Typing in Microsoft Word Windows and Mac?

How to Use Voice Typing in Microsoft Word Windows and Mac?

Preparing a long document by typing word by word can easily make you boring. Microsoft Word being a most popular documentation software offers simple solution to overcome this situation. It is called “Dictate” feature which helps to convert your speech to text and type on the document. You can use voice typing in Microsoft Word without touching keyboard and finish the document quickly. After finishing the document, you can use Editor to check spelling and grammar to correct mistakes before sharing the document with others.

Before explaining the function in Word, here are the things you should understand.

Considering voice typing or dictation is part of both operating system and Word, here are the possible ways to use in Word:

It is super easy to start using dictation in Word.

2. Use Windows Voice Typing in Word

As mentioned above, Windows has a separate feature called voice typing. This works similar as Word dictation and generate text output from voice or audio input. Earlier, you should setup external microphone and configure voice recognition for using Windows voice typing feature. Now, you can simply start using the feature by using a keyboard shortcut on any text input screen.

3. Use Voice Typing in Word for Mac (Dictate)

Word for Mac (Microsoft 365 subscription) also has a similar setup like Windows version.

Mac comes with a “Dictation” feature similar to Windows voice typing. This is by default enabled and you can check and configure the settings if required.

Remember that when using dictation, Mac will send your voice inputs, contacts and location information to Apple for processing and converting to readable text.

As we tested, voice typing and dictation features work very well with all the above options for converting your speech to text. However, the problem is that you should understand some basic commands for using these features.

Below are the links to get complete list of voice typing commands from official Microsoft and Apple documentations. 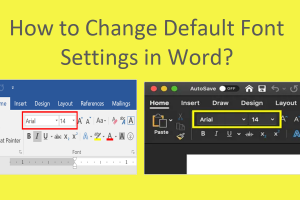 How to Change Default Font Settings in Word?

How to Change Default Font in Word?

Microsoft Word is the most powerful word processing software available[...]

Whether you are a student, teacher, or working professional, solving[...] 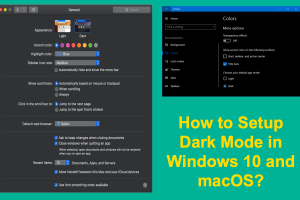 How to Setup Dark Mode in Windows 10 and macOS?

How to Use Dark Mode in Windows 10 and macOS?

By default, both Windows 10 and macOS display the screens[...]