4 Ways to Use Experimental Features in Chrome

Google Chrome is one of the popular and highly used browser both on Windows and Mac. If you use Chrome as a primary browser, then you don’t need to get bored with the same features. Google does some new things with its products every day and added some really cool experimental features in stable Chrome version also. These features, as mentioned, are experimental and provide you better look and experience while using Chrome. In this article let us discuss how to use experimental features in Chrome browser.

4 Ways to Use Experimental Features in Chrome

The stable version is the regular Chrome browser you install from the official Chrome site. This is tested by Google and volunteers and then released for public use. Stable version is the one normally everyone of us using on the computer, generally sufficient for normal internet usage. All other versions are experimental and not completely tested by Google. They may break the websites when viewing and generally used for testing and development purposes.

Chrome beta channel version allows you to play around with new features just before they get released to stable version. This is a safer way to try out newer features compared to developer and canary versions. You will get minor updates for beta version approximately every week and major updates in every six weeks. The features will be available roughly a month before they are available in stable version.

Developer channel version is between the beta and canary channels. Less riskier than canary and more riskier than beta version. It gets update one or two times in a week. The features may still have bugs since they will further go through beta channel for testing before releasing to stable version.

Chrome canary version is the bleeding edge version available immediately after the development of new build is done. This essentially means canary version is not tested at all and meant for developers and designers for early testing. This is the combination of Chromium and Chrome developer version you can say like that also. You’ll will probably get the updates every day.

Go to Chrome canary site and download the latest canary version to chill out with your browser.

4. How to Use Experimental Chrome Flags?

Flags are basically new features added with or without testing to the stable Chrome version. Google Chrome has these features from very long time but some of us didn’t even know about them because they are not added to the settings panel. There are tons of them, some of them are good but some of them are pretty useless though.

To access these experimental features, open up Chrome browser, type “chrome://flags” in the address bar and hit enter. You will see a warning message indicating the potential risk of enabling the flags on the browser.

Let’s take an example of a flag that helps to close the Chrome tab and windows fast. Use the search box and enter “fast tab” to filter the flag “Fast tab/window close”. By default this flag is disabled in Chrome, just click on the “Disabled” button and choose “Enabled”.

You should relaunch Chrome when changing the flag settings. After relaunching you will notice the Chrome tabs and windows are getting closed faster than normal.

Some of the Common Issues with Experimental Stuffs

When you are dealing with non-tested browser then there is 90% chance that you’ll get issues in that. Below are some of the frequently faced issues when using unstable versions or flags:

These are few of them, there could be more. So, it’s recommended to use to stable version of Chrome if you are not a developer building applications or a geek wanting trouble.

All the versions of Chrome can run in parallel on Windows 64 and 32 bit machines. While on Mac, only canary version can run in parallel to other versions. On mobile and Linux platforms, you should have only one version installed at any point of time. You can get the complete details here. When you planned to switch between channels, we strongly recommend you to backup the profile data including bookmarks. It is not possible to use the backup profile data from one version to another version of Chrome.

Remember using beta or developer versions or experimental flags may delete all of your data, you can lose your security or privacy in different way. If you’re trying these features proceed with caution. Make sure you understand the risk clearly that there could be data loss of yours. It’s a good idea to run these versions in parallel to try out new features withouts affecting your stable working. 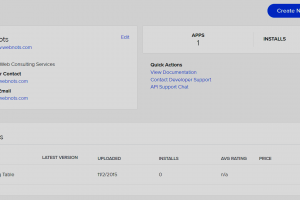 How to Use Weebly Developer Platform?

In addition to free website creation tools with huge design[...]

How to View Webpage Source Code in Safari iPhone

How to View Source Code of Webpages in Safari iPhone on Mac?

On desktop computers, you can use the developer console on[...]