Division sign ÷ is one of the basic mathematical symbol. However, default keyboard layout does not have a division key. You can use the keyboard shortcuts to type division sign in documents. Note that division sign is also referred as obelus sign in typography. In addition, there is also a divide emoji that you can use similar to division sign.

Related: How to type less than and greater than symbols using keyboard?

Here is a summary of keyboard shortcuts for division sign.

Below is how the symbol will look like on all supported browsers.

On web documents like HTML and CSS, you can use the escape entity values to type symbols. For example, use & # 247; in HTML without any spaces to produce ÷ sign.

Below is the CSS code example:

In addition to standard division sign, Unicode has few other variations. It also includes a divide emoji that you can type with keyboard.

The heavy division symbol is actually a divide emoji that you can insert using emoji keyboard in Windows, Mac and smartphones.

Normally, ÷ is used in printing and mathematical equations. However, people use right slash symbol / in free handwriting. Here are some examples using different division signs.

Note: You can use equation editor in Word and Excel to type formal mathematical equations and formulae. However, use the keyboard shortcuts to type the symbol inside Excel cell or aligning with other text content in Word document.

Below is a quick reference shortcut card that you can use for offline purpose. 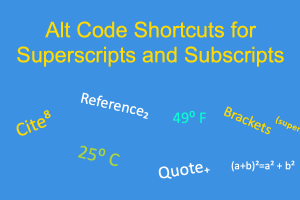 People use superscripts and subscripts in documents for citation purposes.[...] 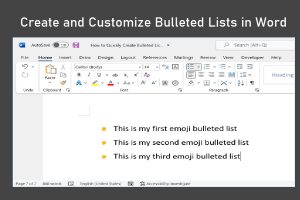 How to Create and Customize Bulleted Lists in Microsoft Word?

Bulleted lists are simple ways to add points in smaller[...] 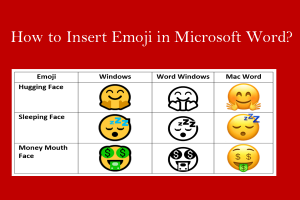 How to Insert Emoji in Microsoft Word?

How to Type Emoji in Microsoft Word?

Microsoft Word is indisputable application in documentation world. When preparing[...]