How to Type Pi Symbol π with Keyboard?

Pi is one of the most popular mathematical constants used in all areas of mathematics and physic. It is the ratio of circumference to diameter of a circle and has an approximate value of 22/7 or 3.14. You can easily write Pi with freehand as a Greek small letter Pi (π). However, there is no default key available in keyboard to type Pi in Windows and macOS. If you need to frequently use π in your documentation, here is how you can type Pi symbol with keyboard shortcuts.

Before we explain different methods to type Pi symbols, here is a summary of keyboard shortcuts.

There are multiple ways to type Pi symbol in Windows depending on the application.

When you have larger keyboard with separate numeric pad then using alt code shortcuts is the easiest option.

This is a useful option to type the symbols only in Microsoft Word documents. The advantage here is that you do not need separate numeric keypad for this to work.

In addition to above alt + x method on Word, you can use the Symbol utility in all Microsoft Office applications like Excel, PowerPoint and Outlook.

You can use the equation editor in Office applications when you want to type quick equations with Pi. Go to “Insert > Symbols > Equation” to open equation editor. You can choose equations like A=πr2 directly from the available formulae or type Pi symbol by choosing it from “Basic Math” symbols list.

You can use the autocorrect option in equation editor by typing \pi to make the symbol quickly. However, equations are not like normal text in your document. You may to align them properly to blend with other content especially when you need to print out.

If none of the above methods work, then you can use the standalone Character Map app in Windows.

Windows computers come with an emoji panel that you can access by pressing “Win + Dot” shortcut keys. After opening the pop-up, click on “Symbols” and then “Language Symbols”. Here, you can find the Pi symbol π and insert on any application.

It is also easy to type Pi symbol in Mac using one of the below methods.

The easiest method to insert π symbol in Mac is to simply press “Option + P” keyboard shortcuts. This should work on all models and all OS versions. In case if this shortcut is not working, try any of the below methods.

First, you have to change your keyboard input method from the standard ABC to Unicode Hex Input. You can toggle the language input anytime from the top bar.

If you are not able to change the keyboard input, follow this method to type Pi symbol using Character Viewer app.

Type Symbol in HTML and CSS

You can use the decimal or hexadecimal code points in the below format to insert Pi symbol in HTML documents. In addition, Pi also has a HTML entity name which you can use.

Similarly, use the hexadecimal value like below in your CSS to insert Pi symbol.

Pi symbol is like any other text characters in Windows and Mac applications. Therefore, you can change the font color, size and apply text effects to the symbol. In addition, Mac Character Viewer app offers in-built font variation for the symbol. You can choose the symbol that look like freehand writing from the hundreds of available variations.

Below are some of the examples of Pi symbol with text effect in Microsoft Word document. As you can see, you can apply text effect to highlight the formula or equation to differentiate from other text content.

Below are some of the other Pi symbols with variations. Remember, Greek also has a capital Pi Π (alt + 0928) and a Pi symbol ϖ (alt + 0982) which are different than the mathematical Pi (π) symbol.

As mentioned, the approximate value of Pi is 22/7 and below are some of the fractions used to calculate Pi value.

However, Pi is an irrational number having never ending decimals with no repeating pattern. People use 3.14 as an approximate value and here is the first 100 digits of Pi value.

You can also quickly get the Pi value by searching in Google which will show up to 11 decimal points. 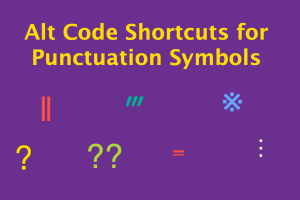 Punctuation makes your writing expressive and meaningful. In a dictionary[...] 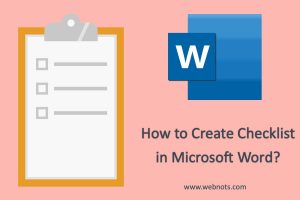 How to Create Checklist in Microsoft Word?

How to Create a Checklist in Microsoft Word?

Microsoft Word has a hidden feature to create editable forms[...] 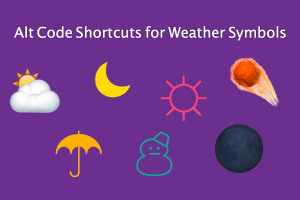 The default Unicode system contains all weather symbols under miscellaneous[...]