How to Insert Emoji in HTML?

Emoji are the for the past thirty years and became extremely popular with the use of smartphones. Though initially young people use emoji in informal chat and instant messaging conversations, nowadays it has become common to use emoji in formal communication. If you are a web developer, blogger or site owner, it is also possible to insert emoji in HTML like any other text content. This will make your content appealing to the readers when reading on the browser.

Before proceeding further, here are some of the points you need to understand about emoji.

Without having keys on your keyboard, let us see how you can insert the emoji in HTML.

The purpose of Unicode consortium is to make emoji as a standard characters used uniform on all devices and languages. In order to accomplish this task, they will assign a unique codepoint for each emoji symbol with a default representation. Developers of applications and operating systems can make use of this codepoint to either use the default representation or customize the appearance. For example, U+1F609 is the codepoint for the popular Winking Face emoji. You can get the codepoints from official Unicode emoji page.

As you can see the codepoint is nothing but the hexadecimal code in the format “U+ hexadecimal”.

As mentioned, the first and important step is to make sure your HTML document has the charset meta tag like below:

The complete HTML template should look something like below:

Make sure to use the character encoding declaration immediately after the head tag. This will instruct the browsers to interpret hexadecimal and decimal escape strings as proper emoji symbols.

HTML Tags to Use with Emoji

As emoji are text characters, you can use any text related HTML tags to insert emoji. Paragraph and span tags are two easy options:

Remember, generally paragraph tag will create a new line while span will continue in the same line. In addition, you can also use emoji with other tags like <li> to create emoji list. After defining the character set and decided the tag you want to use, there are multiple options for you to insert emoji in your HTML page.

Let us take the same Winking Face emoji example. You can use the following hexadecimal code format in HTML to insert the emoji.

You can either use capital or small letters to type the hexadecimal code. It will produce the result as below.

This is a Winking Face 😉 emoji symbol.

Instead of hexadecimal code, you can use the decimal code as escape string with the below format.

It will produce the same result as above. The only difference is that you can remove the ‘x’ in the syntax when using decimal code.

Though the above two methods are easy to use, it will not work for all the cases. The problem is that not all emoji have single codepoint. There are many emoji symbols contain combination of codepoints. For example, the codepoint for scientist emoji is U+1F9D1 U+200D U+1F52C which you can’t type with the above methods.

The easiest option here is to copy and paste the emoji you need between HTML tags.

Now that you may ask a question, from where you can copy all these emoji symbols:

Most people use a text editor for preparing your HTML document. All text editor applications like Notepad, Notepad++, TextEdit, Brackets, etc. support inserting the emoji as explained above. Though editors like Notepad will show the emoji in plain black and white color, they will appear in solid color when displayed in browser.

Make sure to save the document in UTF-8 format.

Below is an example of the code in TextEdit editor and how it will show in Google Chrome browser.

If you use app for creating your HTML page, you can use the direct insertion method or use the keyboard shortcut. Remember, some content management system like WordPress uses PHP instead of HTML. You can learn more in a separate article about inserting emoji in WordPress.

As mentioned, the appearance of emoji can be different depending on the character encoding used by that application. For example, Microsoft Edge, Firefox and Chrome may show the same emoji in different formats. Besides this factor, you will find some emoji symbols will show as a square box or display multiple symbols. This happens when the browser does not support the emoji character. Unicode releases new emoji every year and browsers need some time to adopt the new characters. Until that time, you will see a box instead of emoji.

For example, Heart on Fire emoji will look two symbols like this ❤️‍🔥. You can find all new emoji symbols are marked with ⊛ symbol in the official Unicode page. This is to indicate that the browsers may not support these symbols properly and you should avoid using them on your HTML page.

As you can see, there are many ways you can insert emoji in HTML webpages. The easiest one is to use emoji panels or copy paste from third-party websites. However, the emoji display may distract when developing a webpage on the text editors. In this case, you can use hexadecimal or decimal code format for the supported emoji symbols.

How to Use Bootstrap 5 Grid Layouts? 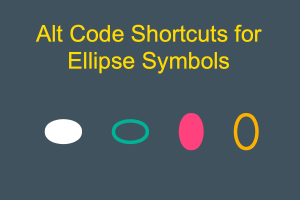 How to Make Ellipse Symbols with Keyboard?

In our earlier article, we have explained the alt code[...] 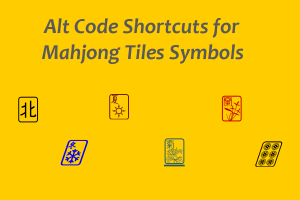 Mahjong is a tile-based game widely played in China. This[...]