Button group as the name indicates is simply a group of buttons aligned together to showcase them as a single element. In our previous buttons tutorial we have explained how to create buttons with checkbox and radio buttons using button group concept. In this tutorial let us explain different types of button groups with examples in Bootstrap 4.

This tutorial covers the following the chapters:

Horizontal button group is the simple form of grouping two or more buttons together. Let us create a button group of four buttons using “.btn-group” class with a div tag. Each button is using different contextual class to show it in different colors.

The “role” and “aria-label” are optional mainly used from accessibility point of view on screen readers.

This will produce the following result in the browser.

Above code is full template code using CDN CSS and script links. You can replace the block between start and end of button group with the code given in the below examples.

The grouping option allows you to have toolbar like arrangement by adding add role=”toolbar” attribute. You can also use button group along with input groups to create toolbars with text input. The sample code is given below:

It will produce the following result on the browser:

As you can see the button group and input group elements do not have any gap. You should use custom CSS to add margin between these two elements to align them properly.

Bootstrap 4 allows you to have three sizing classes for large (btn-group-lg), default and small (btn-group-sm). You can directly add large or small class to the “.btn-group” class to change the size.

The above code will produce the results as shown below:

Buttons can be grouped vertically using “.vertical” class along with “.btn-group” class.

The result of the code should produce the below button group: 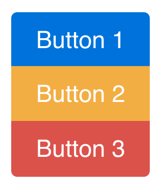 Similar to horizontal nesting, vertical button groups can also be nested with dropdown. 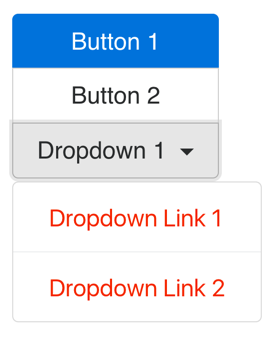 Note split buttons are not supported in vertical nesting.

Web-Boots - The last Bootstrap theme you ever need!!! Buy Now